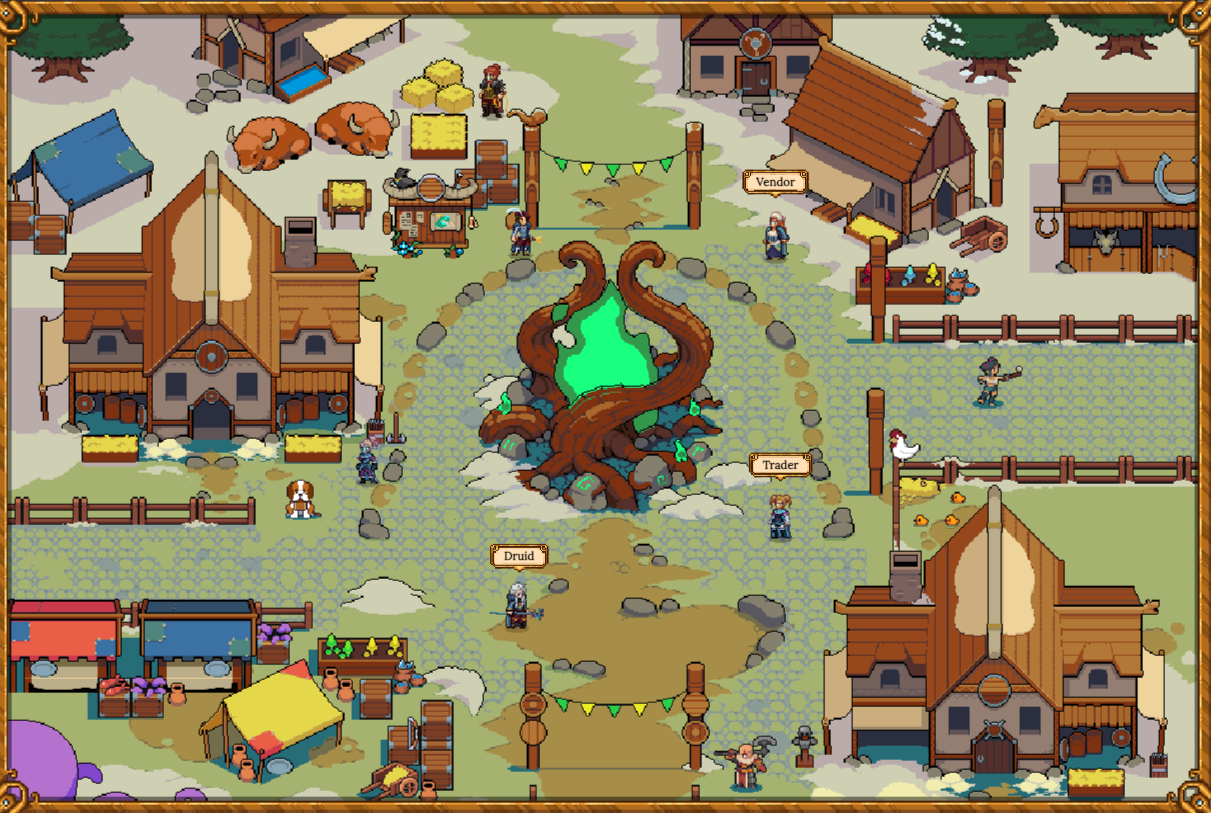 After the successful Cyrstalvale launch and during the last AMA with the DFK design team, @friskyfox cleared the air on the addition of new contents to Serendale. He mentioned their plans for new expansions to the map, new features, and content to come out over the next few weeks. These updates will eventually find their way into Crystalvale. He also talked about the even gene distribution of the new DFK Heroes, details of which will be shared with the community soon.

A DFK team offered a detailed tour of the Crystalvale map interiors, covering the aesthetics of the Docks, Marketplace, Ice Gardens, and The Cradle.

Mainly designed with a lot of creative freedom by Woostar, the Docks, like most of the other interiors, has lots of clickable elements with corresponding animations that make the world more fun to interact with. The Docks also has many little details worth finding.

FYI: the flame in the world map adapts to match activities going on within the marketplace interior.

The music in the garden takes inspiration from the high density of Seers available there, this gives the music a dream-like feel to it. This inspiration goes even further and results in the dark and grungy feel of the music in the Docks. This is a result of the heavy presence of Berserkers there. Likewise, this also influences the marketplace, making its music have both magical sounds alongside dark ones caused by the mixed population of the Heroes available there.

With no Dex functions to it, The Cradle for now is strictly a lore-based zone. In terms of artwork, it was the design team’s most ambitious part of Crystalvale’s interior. Although without function, the serpent in the design has a backstory and a future story which hopefully, in later updates, might evolve into quests.

A portal is currently in the works for Crystalvale and will have the same functions as the one in Serendale. The design team offered a few sneak peeks into the designs being made for the portals.

Zones like meditation circle and tavern will also be available for Heroes. Just like the portal, they will have the same functionality as those in Serendale.

For Serendale, enemy types to be fought in combat will vary depending on the region of the map that you visit. It will also be based on the context of those regions. For example, regions that have towns or large settlements will have bandits. Goblin camps on implementation will have goblins to be fought. Haunted areas like the Abbey to the East of Adelyn will have undead-themed enemies.

The team also shared map expansion plans, along with a short teaser of the audio track for Crystalvale’s portal. Although not strictly concerned with map expansions and not in future plans, however, the caves in Crystalvale mountains might eventually become Dwarven settlements with future functionalities.

Pets will also be getting new updates in the future, like connections to enemies and the DFK environment. The plan is to enhance world-building by connecting pets to different aspects of the DFK ecosystem. One such pet is Illyrian Leafra, a higher rarity pet available in the upper left part of the map. There’s also the possibility of differences in pet types, like legendary types and rare types.